On 22 March 2016, we had a guided tour through the incineration plant in Flingern. We were shown the boiler house, the control room and the waste storage bunker. An extraordinary experience! 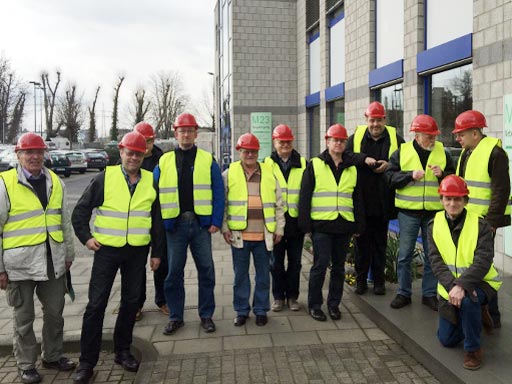 We did a lot to improve the club shack. We installed a 6×2 antenna switch, which greatly facilitates multi-2 operating. One station got a new computer. And finally the shack got cleaned. Thanks to Andreas (DC4AB), Manfred (DH9EO), Oliver (DK7TX), Fabian (DL1KID), Dieter (DL2GK), Holger (DL5KUT), Udo (DL5UI), Hans-Georg (DL6WA), Daniel (DM3DA) and Robert (SWL) for their efforts. 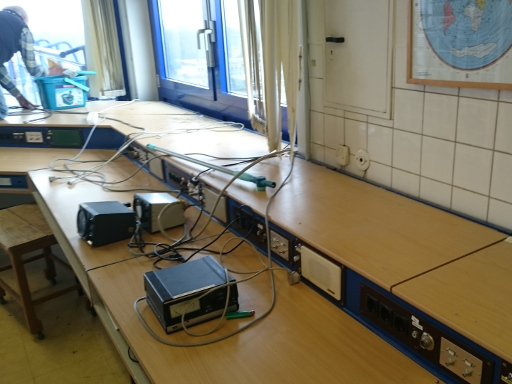 The annual general meeting, as required by the statute, could carried out within 30 minutes on January 21st 2016 (this year without the re-election of the board). We also discussed the technical details and the construction progress of the new distributed direction finding system for 70 cm FM.

The traditional kale meal was a beautiful festival this year. There were not only many members and family members of R01 Düsseldorf, but also many visitors from other local clubs (eg G01 Aachen, R09 Neandertal, R12 Ratingen, R24 Haan) and guests without a club membership. For all there was not only plenty of food and drink, but also a surprise: the original R01 Christmas chocolate. 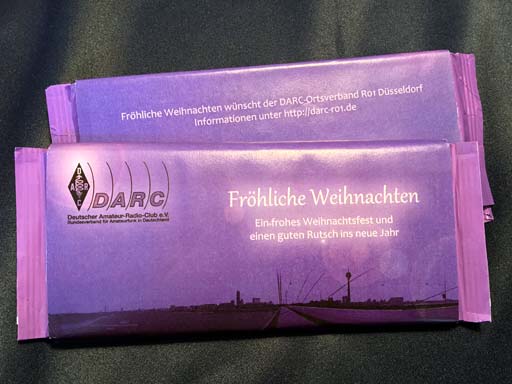 The Christ child had previously left to each of the participants a Christmas greeting, a bar original R01 Christmas chocolate. (Photo: Andreas, DC4AB)

After the meal at the get-together, the people were not just reminiscing, but also planning for next year: Fielddays, training courses, excursions and more. Besides, the contest participation was planned for the weekend … 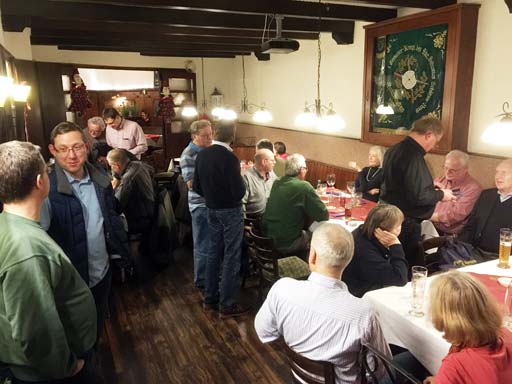 Conversations in a relaxed atmosphere until late in the evening. (Photo: Andreas, DC4AB)

To all who were there: Thank you for coming! And to everyone else: You have missed something - but in 2016 you're welcome.

The first weekend in September was a two-fold success – we operated on HF and on VHF. For the IARU Region 1 SSB HF Fieldday we got the fabulous trailer from DARC District Nordrhein. A Von-der-Ley mast cames with the trailer, and we used a long ladder as second mast. That mast could even a bit longer next time, by the way. With the ladder, we managed to get the antenna high up into the trees. 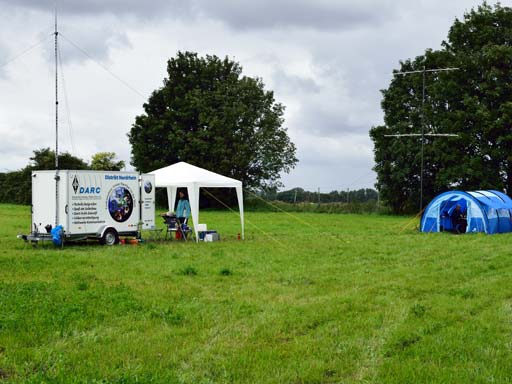 In addition, Kai (DL3EAZ) installed a complete VHF station with two 7 element yagis, a mast and an Armstrong rotor. DL0DX/p was on the air from HF to 2 meters. And shortly before shutdown had Patrick the opportunity to operate as DN3DA/P on 144 MHz (kindly supported by Hans-Georg (DL6WA)). With the new callsign on the band, he raised a lot of interest. 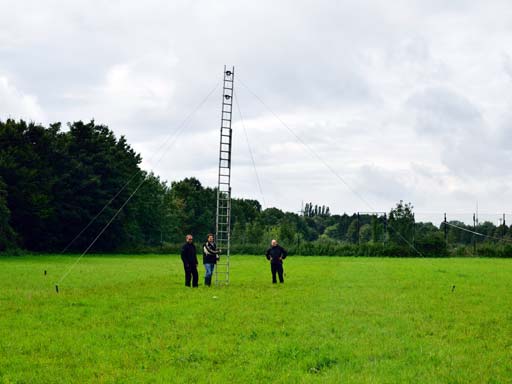 The weather had some challanges with heavy rain at times. Luckily, it wasn't cold and we kept dry while setting up and taking down. The BBQ, cake and coffee was in good supply and so everyboy was having a great time. 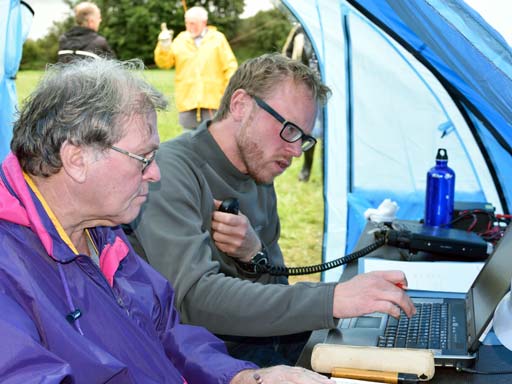 On June 27 and 28 we entered the King of Spain SSB Contest. The weekend before, we had managed to repair the rotor of the 20-meter-beam. In preparation for the contest both stations were synchronized and we had a full-blown Multi-2 station with two Win-Test computers at our hands. The station with the FT-920 had an added linear. The DX Cluster spots were received via Hamnet and the solar storm, which was active the days before, had settled. Perfect conditons for a nice contest. The team (DB1WT, DC4AB, DE3POL, DL1KID, DL2GK and DM3DA) was highly motivated and worked 24 hours. During most of the daytime hours, both stations were in operation. In the end we had 386 QSOs in the log and claimed 177862 points. It was great fun for all, and some were bitten by the contesting bug. It was not just fun, it was a great training exercise, too. We learned how to optimize the layout of the schedule, Spanish for contesters and much more. As always in contesting: every single QSO is good training. Next time, we could try to install a rotatable receiving loop to optimize the station for the low bands. 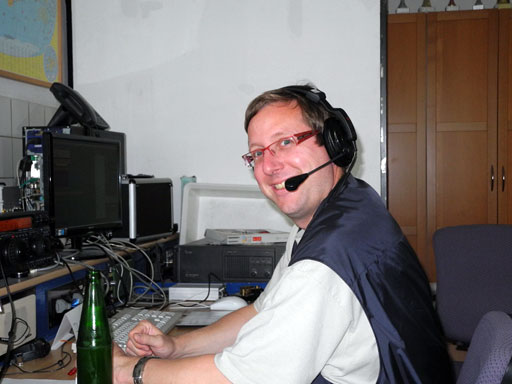 The rotor at the 20 meter beam, which was damaged in the end of March, has now been repaired. Dieter (DL2GK) had soldered the torn cable at home and had ordered a new platform. Then Daniel (DM3DA), Hans-Georg (DL6WA), Fabian (DL1KID) and Andreas (DC4AB) could remount and align the repaired rotor on Sunday, June 21 2015, while Holger (DL5KUT) did wire the control unit. 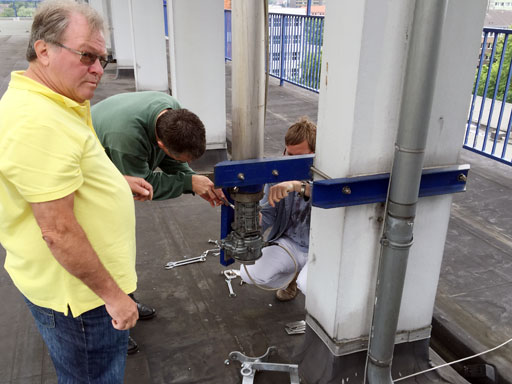 We took part in the IARU 1 Fieldday on Saturday and Sunday June 6/7, 2015. We had fabulous weather with lots of sun, a mild breeze and the occasional cloud. A nice contrast to the thunderstorm the night before. Perfect conditions for portable operation! On Friday before, Dieter (DL2GK) and Andreas (DC4AB) towed the DARC-R trailer from Mönchengladbach. On Saturday morning, we collected the equipment from the club station and drove to the contest site. Once again we set up station on the football ground in Hubbelrath (JO31KG). We were lucky: the grass on the site had just been cut. The setup was quick and easy, because we had decided on entering the restricted class. So we only used lightweight masts, and the trailer with its integrated mast saved us a lot of work. We had a good number of helping hands: Andreas (DC4AB), Johanna (SWL), Kai (DL3EAZ), Michael (DL5JS), Tina (SWL), Holger (DL5KUT), Dieter (DL2GK), Manfred (DH9EO), Fabian (DL1KID) and Daniel (DM3DA). Thus, DA3X/P was operational within a short time. Our CW operators Michael (DL5JS), Holger (DL5KUT) and Kai (DL3EAZ) got nearly 900 contatcs into the log in 24 hours. 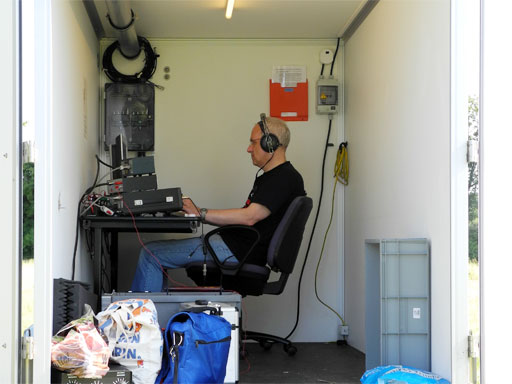 We also had a large tent with cake buffet, a BBQ and coffee bar, space to sleep and two WARC stations. We used verticals for the WARC bands to minimize interference of the contest station. However, we noticed some interference between the 10 meter and 12 meter bands. Apart from DA3X/P, four more stations were on the air: DL1KID, DL2GK/P, DM3DA/P and DN3DA. The best contacts were with Japan, asiatic Russia, Greenland and Azerbaijan. We also had many visitors who were a great support. Thank you all very much for coming! Taking the station down was even faster then setting it up. Due to the nice weather, everything was dry and ready for storing. Many thanks to DARC District R for the trailer and to Dieter (DL6EZ) for the generator. See you all at the September SSB Fieldday! 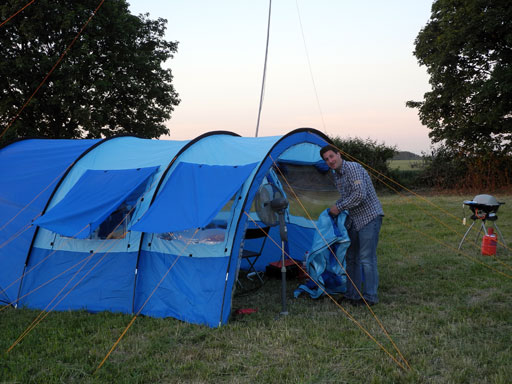 Andreas (DC4AB) while preparing for the night. (Photo: Daniel, DM3DA)

On Good Friday, April 03rd 2015, the eight OMs Daniel (DM3DA), Andreas (DC4AB), Dieter (DL6EZ), Holger (DL5KUT), Hans-Georg (DL6WA) Fabian (DL1KID), Thorsten (DO4TP) and Michael (DL5JS) met shortly in the morning at the club station DL0DX for a big clearance of junk. Because of the requirements by firefighters it is now needed to void all combustible from the metal cabinets standing in the stairwell before the club room. This is because the cabinets are in the area of emergency exit. Several hundred of old magazines and repealed antenna cable were disposed within three hours. Also, in the club room was quite thrown away, for example old computer parts, for which there are no connectivity any longer. A big thank you to all volunteers. 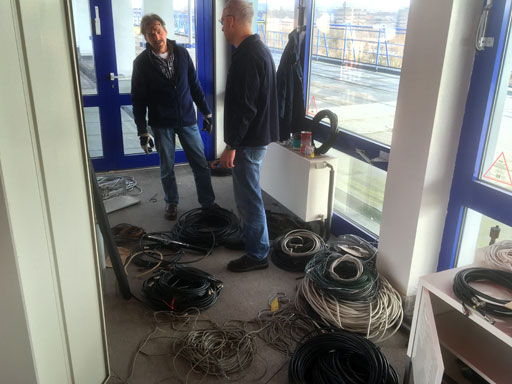 The storm Niklas, which blustered over the entire country on Tuesday, March 31st 2015, has also caused damage to the 20 meter mast at the club station DL0DX. The strong wind has pressed so hard against the 4 element directional antenna, that the rotor at the foot of the mast torn from its bracing and rotated several times with the antenna. By this the rotor control cable was teared out of the rotor block, together with the socket. The rotor has now been removed and the axis was fixed. In the coming weeks, the rotor has to be repaired and reassembled. 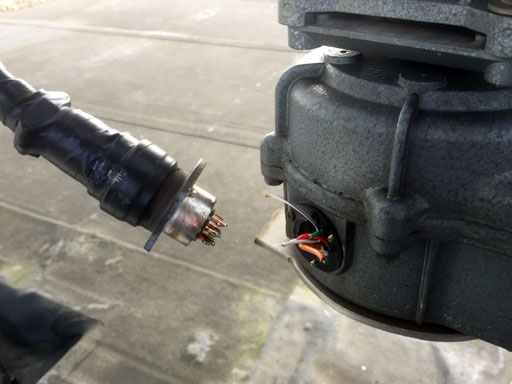